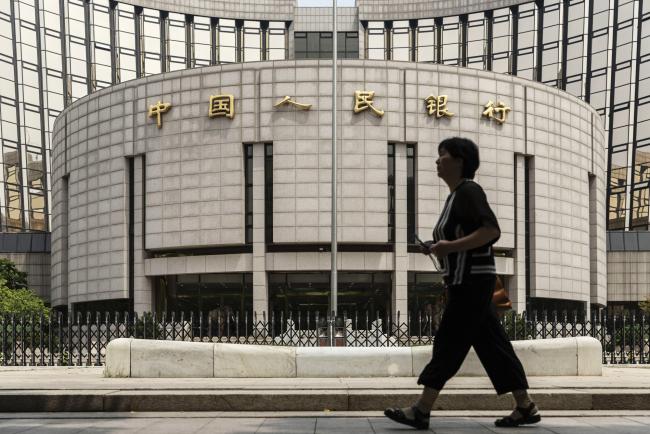 (Bloomberg) — China’s central bank will skip a chance to cut borrowing costs in the coming days, holding off on clear-cut monetary easing for now as it lets a recent overhaul of the interest-rate system bed in.

That’s the view of 28 out of 34 analysts surveyed by Bloomberg when asked if they expect the People’s Bank of China to cut the interest rate charged on 1-year funds, after 149 billion yuan ($21 billion) of that lending matures on Saturday. Instead, the rate on the medium-term lending facility will be kept at 3.3% if fresh funds are supplied, according to the survey.

Policy makers unveiled the revamp of its rate system this month centered around an improved market benchmark, the Loan Prime Rate, and argued that the reform alone would help lower borrowing costs to the real economy. Yet as output continues to decelerate, analysts see cuts to actual policy rates as on the cards.

“I think the central bank will lower the MLF interest rate within a quarter, but it may not do it right now,” said Wang Yifeng, chief banking analyst at Everbright Securities Co. in Shanghai. Liquidity is ample, and banks’ willingness to borrow MLF is not strong, he said, adding that the transmission effect of a slightly lower LPR remains to be seen.

On Tuesday the new one-year Loan Prime Rate, which is an average of the price banks charge for loans, was set at 4.25%, marginally lower than the previous LPR rate and the old one-year benchmark lending rate. Prices for MLF funds are now the basis for the new reference rate for bank loans.

Even though China’s economy is slowing to its weakest pace in almost thirty years, the government remains focused on stability rather than speed amid the broadening confrontation with the U.S.

The central bank could wait until the interest rate spread between the LPR and MLF narrows before lowering MLF rates, and policy makers will also take into account the domestic economy and actions by the Fed, according to David Qu, a Bloomberg Economist in Hong Kong. Everbright Securities’ Wang expects the PBOC to follow the Fed if the latter cuts rates in September.

On Sept. 7, one-year funds worth 176.5 billion yuan mature, providing another opportunity to adjust rates. The PBOC does not however have regular policy decision meetings, and can intervene in money markets at any time.

McLaren Automotive is keeping production in the UK despite Brexit