For all economic and data releases see the DailyFX Economic Calendar

Scotland’s highest civil court has ruled that PM Johnson’s suspension of the UK Parliament was unlawful, overturning an earlier ruling in a Scottish court last week. The court said that they were unanimous in believing that the suspension was ‘unlawful because it had the purpose of stymying Parliament’ and that the court will make a ruling ‘declaring that the Prime Minister’s advice to HM the Queen and the prorogation which followed thereon was unlawful and is thus null and of no effect.’

The Scottish court did not order the suspension overturned and said that the British Supreme Court will decide on the ruling at a full hearing starting next Tuesday. A UK government spokesman said that they were ‘disappointed’ by decision and will appeal to the UK Supreme Court.

Sterling took the news in its stride in what otherwise has been a quiet session. GBPUSD trades around 1.2360, within striking distance of Monday’s 1.2389 high, a level last seen in late July. 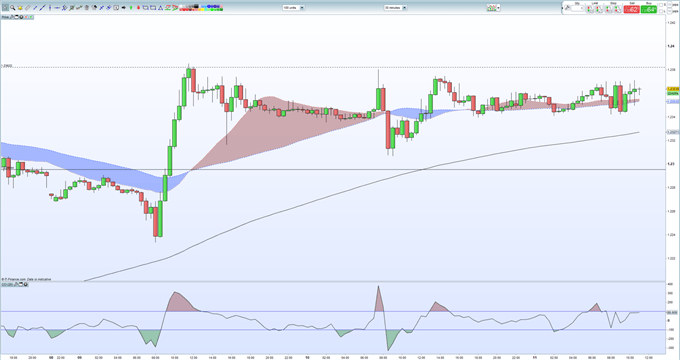 Traders may be interested in two of our trading guides – Traits of Successful Traders and Top Trading Lessons – while technical analysts are likely to be interested in our latest Elliott Wave Guide.

What is your view on Sterling and Brexit? You can let us know via the form at the end of this piece or you can contact the author at nicholas.cawley@ig.comor via Twitter @nickcawley1.