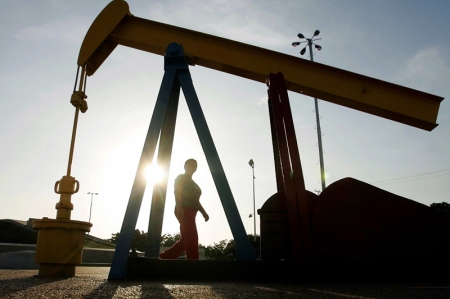 Dec 2 (Reuters) – Venezuela’s state-run PDVSA PDVSA.UL and its joint ventures exported over 1 million barrels per day (bpd) of crude and fuel last month, rebounding from October due to larger sales to India, according to internal company reports and Refinitiv Eikon data.

The company sent a total of 37 cargoes containing 1.037 million bpd in November, a 25% increase from October, and the third highest monthly figure since the U.S. government in January imposed tough sanctions on PDVSA.

Petróleos de Venezuela, S.A., known as PDVSA, did not respond to a request for comment on Monday.

Exports to Europe declined to some 68,000 bpd last month from 89,000 bpd in October following the termination of a supply contract between PDVSA and European refiner Nynas AB in late October due to U.S. sanctions. shipments to China fell to just one 1.8-million-barrel cargo in November, but the Asian nation recently ramped up imports of crude blends made with Venezuelan oil by way of Malaysia’s trans-shipment hubs. to Cuba declined to 67,000 bpd from 118,000 bpd in October and 143,000 bpd in September.

Russia’s energy giant Rosneft took the bulk of PDVSA’s oil sales with 36% of the monthly total, mostly bound for Asia. That was followed by Reliance with 13% and Spain’s Repsol with 8%, the data showed.

Most sales of PDVSA’s oil under sanctions are registered as payment of loans granted by Russian and Chinese entities to Venezuela in the last decade. Swaps of Venezuelan crude for foreign fuel also are allowed under the U.S. measures as long as no cash payment is received by the state-run company.

Venezuela’s fuel imports declined in November to some 132,500 bpd. The country has bought an average of 175,000 bpd of fuel this year, including gasoline, diesel, gasoil, heavy naphtha, liquefied petroleum gas and refining feedstock.

Watch out for these ETF surprises in 2020, industry pros say